For the first day we got in to our hotel in Vancouver around 6:30pm. We were pretty hungry at that point. All we did that night was walk down to the Yaletown area and had dinner at the Yaletown Brewery. Sam had her first "legal" beer that night. The drinking age in Canada is 19.

The next day we went to a breakfast place called the Elbow Room cafe. It is a greasy spoon kind of place - usually the kind we love - but they didn't have decaf coffee. That was the start of Jan's bad day. After breakfast we went to the Capilano Suspension Bridge park. I am so very proud of Jan. She walked across the suspension bridge and faced her fears!!! The park was really fun, but Jan got stung in her leg by a bee. It really hurt bad for the rest of the day. We also went on the cliff walk. It was a different kind of suspension bridge at that point Jan was afraid of nothing.

After the park we went to Granville Island for dinner. It is a little peninsula near our hotel with lots of restaurants and shops. They have a kind of indoor market where we had dinner. Sam bought some Rambutan fruit at the market. Jan and I tried some, it tasted ok but was weird none the less.

Today we ate breakfast at the hotel. It was a familiar Holiday Inn breakfast but this one you had to pay separate. After breakfast we went on a bike ride around Stanley Park. It was a really pretty drive with a great view of downtown Vancouver across Coal Harbour. After making our way around the perimeter of the park we stopped at the Stanley Park bar and grill. Kind of a fancy place. They were preparing for a wedding. We had some hummus and a coke. When we got back to the car we found that our parking had expired and we got a fine of $40 Canadian. We turned in our bikes and got dinner at the White Spot restaurant. It reminded me of a Marie Calendars restaurant. The food was good though. After dinner we went back to the hotel and crashed.

We planned a trip to Steveston BC. A small town south of Vancouver where they filmed the TV show Once Upon A Time. First we ate breakfast at a place up the street from our hotel called "Joe's Place". A small diner with really good food. Steveston is a small fishing town south of the airport. It is really nice and quaint. We stopped at the post office and got a map showing which stores were transformed to the stores in Storybrooke, the town in the TV show. It was a great relaxing time. On the way back we stopped at Queen Elizabeth park near Vancouver. It was on a hilltop and had a great view of the city. Sam and Jan went into the conservatory with to look at the various plants and flowers. The whole park was beautifully landscaped. They were even holding a wedding when people we were there. After the park we went back to our he hotel and walked down to Earl's restaurant. The food was good but it was obviously a singles place and we felt a little out of place. 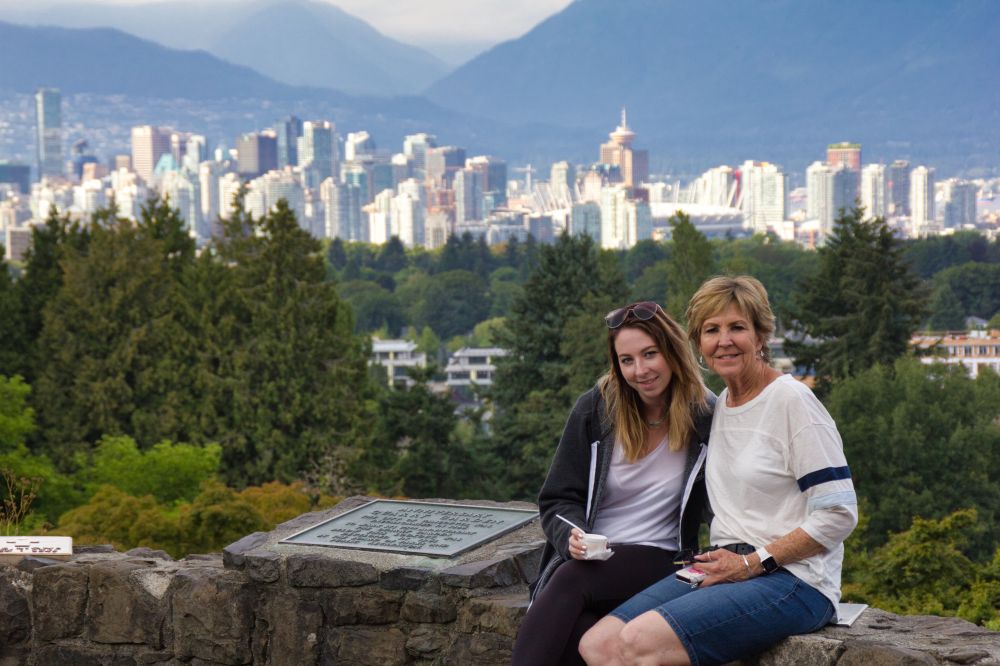 A view of Vancouver from Queen Elizabeth Park

A view of Vancouver from Queen Elizabeth Park