We arrived in Maui on Thursday, got our rental minivan and went to a local chicken katsu place that Sam picked out. It was a really "local" place, but the katsu was great. We drove to our condo and checked in. After freshening up a little we went for a sunset dinner at the Sea House restaurant nearby. The food was good and it was a great start to the vacation.

The Day from Hell

Every vacation has to have the "Day from Hell". We wanted to get ours over with early. We started out driving north to go see the Nakalele Blowhole. The drive to the blowhole was nice though a little bit of a windy road (little did we know). We didn't get all the way to the blowhole, it was a steep climb and we were in flip flops, but we still got some pics. After the blowhole we proceeded east to Kahului on our way to visit Pa'ia. That was the adventure. The road was barely one car wide and hairpin turns around mountain cliffs. Fortunately we didn't find many cars coming the other way.

Pa'ia was a nice little town. There were a few small shops and a Rock & Brew's (a little weird for such a small place). We got some nachos at a local eatery and proceeded to walk the town. After Pa'ia we went to have dinner at the Hali'imaile General Store. This place was recommended by Larry (Jan's boss) and it was really good food. The purple stuff is local sweet potatoes, they are naturally that color!

Our DFH wasn't over yet. I still wanted to drive up to the top of Haleakala to get pictures of the sunset and the Milky Way. I did get a few sunset pics, but we had to stop before the top since the sun was already setting. We all had to use the bathroom really badly and rushed to the summit only to find the bathrooms LOCKED! As it turned out, there was a full moon and getting pictures of the Milky Way was not possible anyway. We went back down the mountain a little ways to a hiker's trailhead where there was a bathroom (whew!!). We then went the rest of the way down. We almost hit several cows on the way down who were wandering in the middle of the road. Thanks to Sara's keen eyesight she warned me in time before I had a USDA prime bumper. We made it down the mountain and I stopped at a scenic overlook near Lahaina to try one last shot at getting the Milky Way - but no dice.The moon was too bright. I did manage to get a nice night time shot of the bay near Kihei.

On Saturday we had a much more leisurely day. We woke up and had breakfast at the gazebo restaurant which was a little place north of here. They have really good food but a little bit of a wait. It was kind of a prank place. The gazebo has this little spider that drops down from the ceiling above your table but it's a fake spider. It's certainly startles the customers when they're not expecting it.


After breakfast we went down to the beach for a little relaxation and a little splash in the water. That night for dinner we went to Lahaina and had some food at a little burger joint called Kimos. We watched the sunset looked in some gift shops and then went to see the famous Banyan tree. The tree is a enormous and is full of birds chirping and chirping.

Sunday we ate breakfast at the condo. Jan cooked macadamia nut pancakes and we had fresh papaya - mega yum!!! After breakfast we went to the aquarium near the marina. It was a little small, but pretty fun anyway. Then we traveled down the southern coast through the towns of Kihei and Wailea. We stopped at the black beach (Oneuli Beach). One the way back we stopped at a Safeway store in Lahaina and picked up a roasted chicken. We ate that along with some amazing fried rice we bought at the Gazebo the morning before. We had dinner on the lanai and watched the sunset. After dinner we settled down and watched the movie Jumangi (with Robin Williams) - the girls had never seen it before. 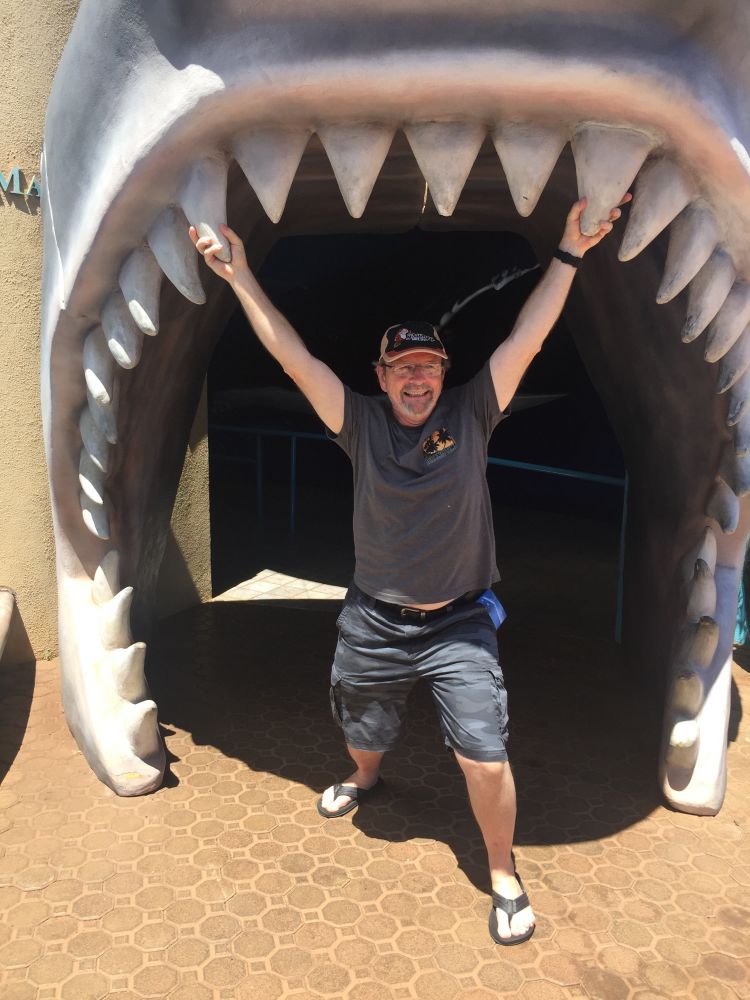 Today we had breakfast at the Beach House. This is the restaurant at the Sands of Kahana where we are staying. It is a nice little restaurant that butts up to the triangular pool.

After breakfast we went on a hike in Iao Valley (sounds like ripping off a bandaid - "eeeooww". The main road to the trailhead was closed so we took a side hike that was not as pretty, but nice none the less. We went back to the condo to shower and get cleaned up for dinner and the show that evening in Lahaina theater. We ate at a place called Cheeseburger in Paradise. Good burgers and live music. One of the waiters was staring at Sam and finally came over and said she looks exactly like his sister. He looked like a short Mark Wahlberg. The show we saw was a tribute to Elvis called "Burnin' Love". It was a great show. The Elvis was from Canada and really did a great job. 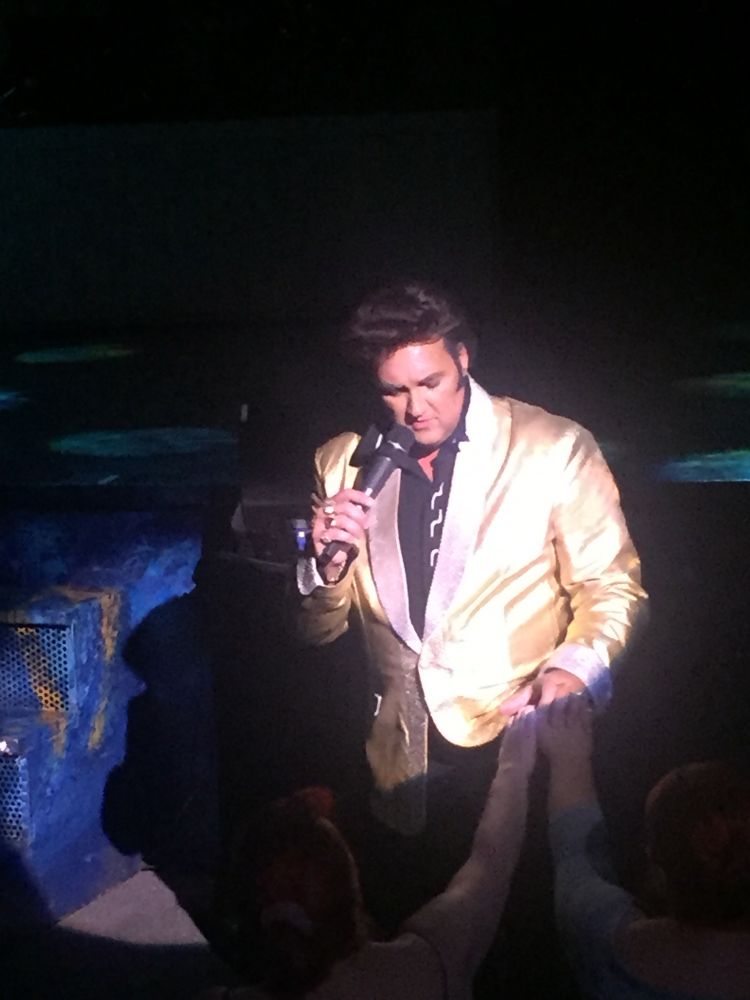 We were going to go snorkeling this morning but the wind is blowing pretty hard and the water was rough so we decided to put that off until the next day. Instead we decided to go to the local market, pick up some sandwiches and set off for the road to Hana. Some of us are not good with curvy roads so we only planned to go halfway and stop and have a little lunch.
I noticed the tire pressure warning light came on. We got some sandwiches and some papaya and I bought a can of "fix-a-flat" just in case. We left the grocery store and I stopped at a gas station but the air pump was not working very well. They directed me to a 76 station further down the street that had a mechanic. We were starving at this point and decided to stop for breakfast at Starbucks before seeing the mechanic. We got to the 76 station and the mechanic measured the tire pressure and discovered that the tires had too much air. He said that the warning light could come on with too much tire pressure as well as not enough. This was news to me, but he seem to know what he was doing. So I paid him and we were off to our road to Hana.
The road to Hana is a little curvy but nothing compared to the road from hell that we endured on Friday. We stopped at the Kaumahina State Wayside to use the restroom (note: always bring toilet paper with you - just sayin'). We stopped at Ke‘anae Peninsula and ate our lunch. There is a small food stand called Aunty Sandy's but it was closed. It was pretty there and we took some photos and then headed back. We made one stop on the way back to see our one and only waterfall. We may have seen more if we ventured further toward Hana but the day was getting short and we needed to head back.
We stopped in Lahaina on the way back to pick up some pizza at Prison Street pizza. It was a small out of the way place, but the pizza was great. At the condo, after pizza, the girls watched the Bachelor and I worked on the days photos.

We snorkeled in the morning and saw some eels not to far from shore. Always a good idea to wear water shoes. Sam used the mask a little and saw some fishies too. After a short swim, we ate breakfast at the Beach House and headed to Ka'anapali to walk the "strand" they have there. We walked from the park at the south end all the way to the Sheraton at black rock. The girls were excited because there was a celebrity reported via Snapchat at the Hyatt. We stopped half way and had a bite to eat at Whalers village.


Snorkeling with eels
After the walk we headed back to get cleaned up for the luau that evening. We only signed up for drinks and the show, so we had a quick dinner at the cliff divers cafe at the Sheraton before the luau started. The luau was nice they had the traditional Polynesian dances and the weak Mai Tais. Jan and I got called up to the area in front of the stage along with others celebrating their anniversary for a slow dance and a kiss every time the singer sang "Aloha". It was fun.

After the luau we went back to the condo, got on our jammies and watch the Elvis movie "Paradise Hawaiian Style" - not one of his better ones

We decided to go snorkeling one more time Thursday morning before our professional snorkeling event at Molokini. This time Jan and Sam both got an opportunity to do some snorkeling and play with the fishies. I'm really proud of Sam, she went out very far. She's always been afraid of the deep water because she can't swim very well. I think the full-face masks that we purchased are a lot better for her and make it easier for her to breathe. Sam was really excited because she got to see one of those boxfish that she thinks are so cute.

After the beach we got cleaned up and went shopping in Lahaina. It was a pretty hot day but we cooled off with shaved ice at Ululani's Hawaiian Shave Ice, the best in Maui. We stopped in a few shops and Jan got a beautiful Hawaiian sun dress for her and one to take back to her sister. We stopped at the local market and got some sandwiches for dinner. After dinner we watched Pretty Woman with Julia Roberts and Richard Gere. The girls had never seen it before.

Friday: Today we got up really early because Sara and I had to catch a boat to Molokini to do snorkeling. The boat left at 7 AM and it was about an hour drive away. We made it fine and Jan and Sam went shopping while we were on the boat. The snorkeling was amazing at my team. We ended up renting some wet suits to keep us warm because we were going to be in the water for over an hour and a half. There wasn't as much variety of fish as there was at the beach right off of the condo where we were staying, but the water was much clearer. 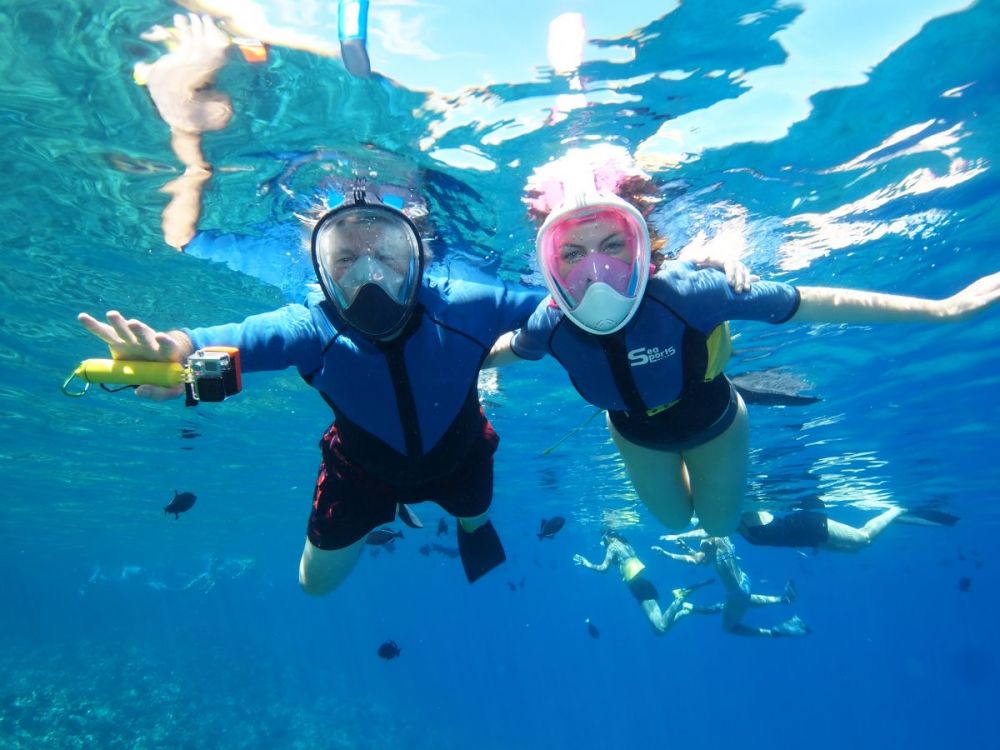 After snorkeling we went to Lahaina to do some more shopping. Got some last-minute souvenirs to take home. We didn't spend too much time shopping because we had to get back and get cleaned up before leaving for Mamas Fish House for dinner. We left a little bit late and arrived at the restaurant about a half an hour after our reservation, but they were able to seat us pretty soon anyway. Our dinner was absolutely delicious and the atmosphere is fantastic. It reminds me of those old Hawaiian movies with the leaning palm trees and the tiki torches. Dinner was not cheap but worth it and was very very good - I highly recommend it. 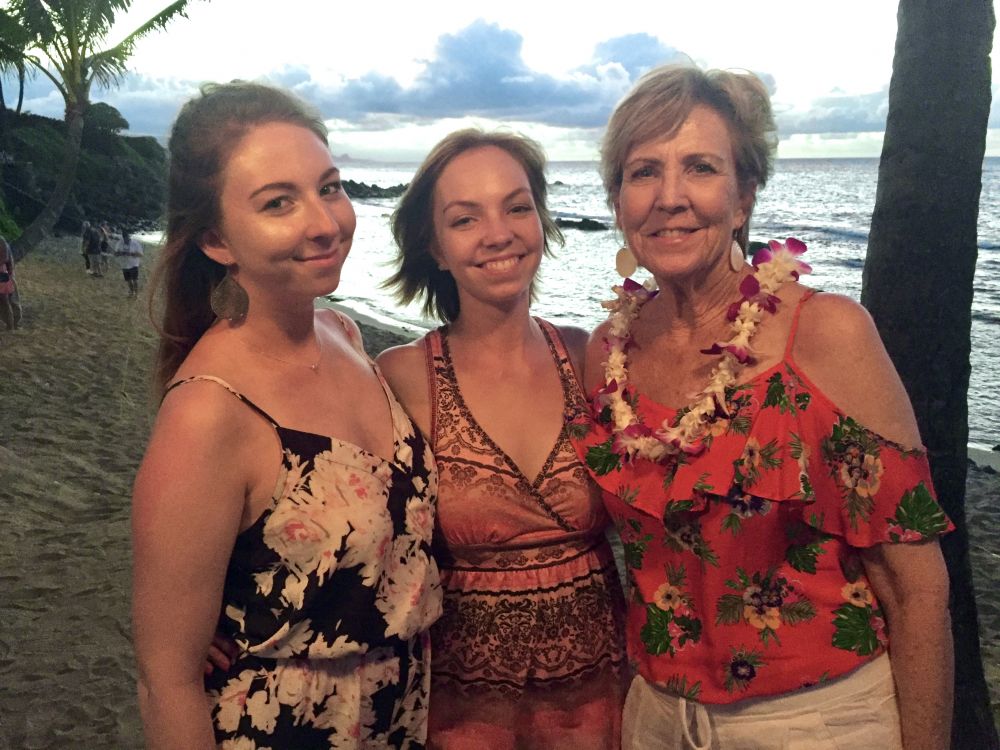 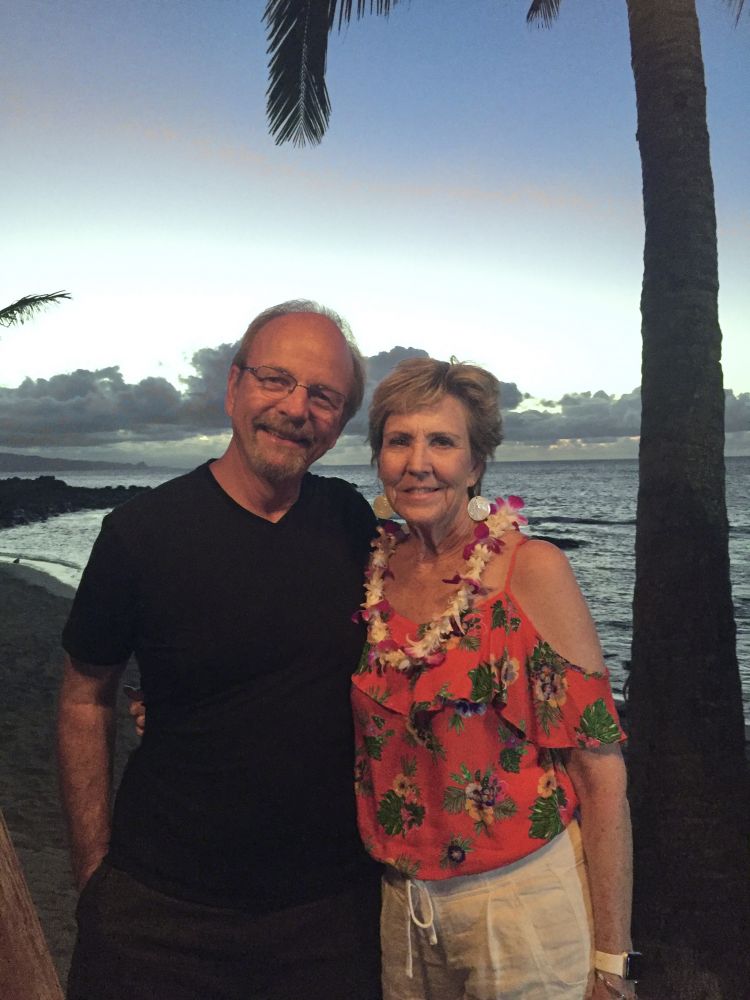 Nooooooo!!!!! We don't want to go. We really don't, but the girls insisted on one last dip in the ocean before we left. Who am I to argue.